“An excellent combination of a modern scaffold access system and a modern building method.”  The benefits arising from the use of the Layher Allround scaffolding system during the construction of a new McCarthy & Stone residential facility are clear to Dominic Short, Director of DJ Short Brickwork Ltd., who have been appointed to undertake the building work at the site in Loughton, Essex.

“We are using the Porotherm thin joint block system extensively at the site which enables construction to be undertaken far more quickly than conventional brickwork methods,” he says.  “However, this means the scaffolding system has to keep pace, and our decision to use the Layher equipment throughout has contributed significantly to the work proceeding at the optimum rate.  This is a key consideration for the project whilethe scaffolding design has also met with clear enthusiasm from the range of trades involved.”

The new McCarthy & Stone premises will offer 38 one and two bedroom apartments together with a range of communal facilities, and is the latest in a long list of construction projects undertaken by Bedford-based DJ Short Brickwork for the retirement home specialists.  With units already being reserved, the target date of an autumn 2017 completion is firmly set, so the reliable scheduling of the build programme is fundamental.

“Crucially we have been able to use the Layher scaffold system to create both an internal birdcage structure and access to the external façades,” continues Dominic Short.  “The birdcage has acted as support for working decks at each of the two floor levels, optimising the installation of the floor steelwork.  They also act as both crash decks and as storage facilities with loadings of 7.5 kNm throughout,” he adds.

The scaffold design also incorporates further loading bays and the Layher 500 staircase system, each of which is not only functional but also acts as buttressing for the façade scaffold.  Importantly, these have found favour with the tradesmen on site who have also gained from the almost total absence of cross bracing that is required throughout the scaffold. “The clear walkways that result represent a major advantage to movement around the structure,” points out Dominic Short.  The bricklaying teams also benefit from Layher hop-up brackets that are designed into the scaffold structure.

The combination of the blockwork system and Layher’s Allround scaffolding has resulted in clear time savings compared to a tube and fitting alternative.  DJ Short Brickwork calculates that while each floor would have taken some four weeks to undertake ‘conventionally’, the methods now deployed required just six weeks for the full two floor build to be completed.  This leads directly to a water tight stage being achieved more quickly, allowing the internal fitting operations to begin at the earliest opportunity.

“The benefits of our scaffolding and access systems have been widely demonstrated in a long list of installations, many in the housing sector, and these can be clearly seen at the McCarthy & Stone site in Loughton,” says Sean Pike, Layher’s UK Managing Director.  He believes that speed, safety and versatility are all evident and that the advantages that the systems offer to the personnel involved in the construction programme – from loading capability to ease of movement – cannot be overstated.

“DJ Short Brickwork’s commitment to our system pays testimony to these factors and underscores the company’s focus on providing results that are both efficient and of high quality.  The longstanding involvement that DJ Short Brickwork has had with a name in the retirement sector as well regarded as McCarthy & Stone is, we believe, set to develop further as a result of the methods and materials that they use.  We are delighted to have contributed and to be involved with this success,” concludes Sean Pike. 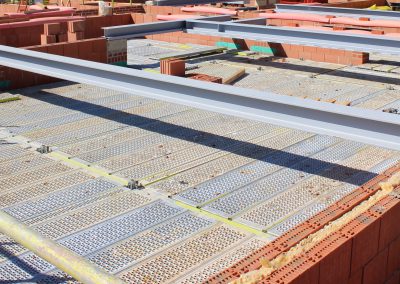