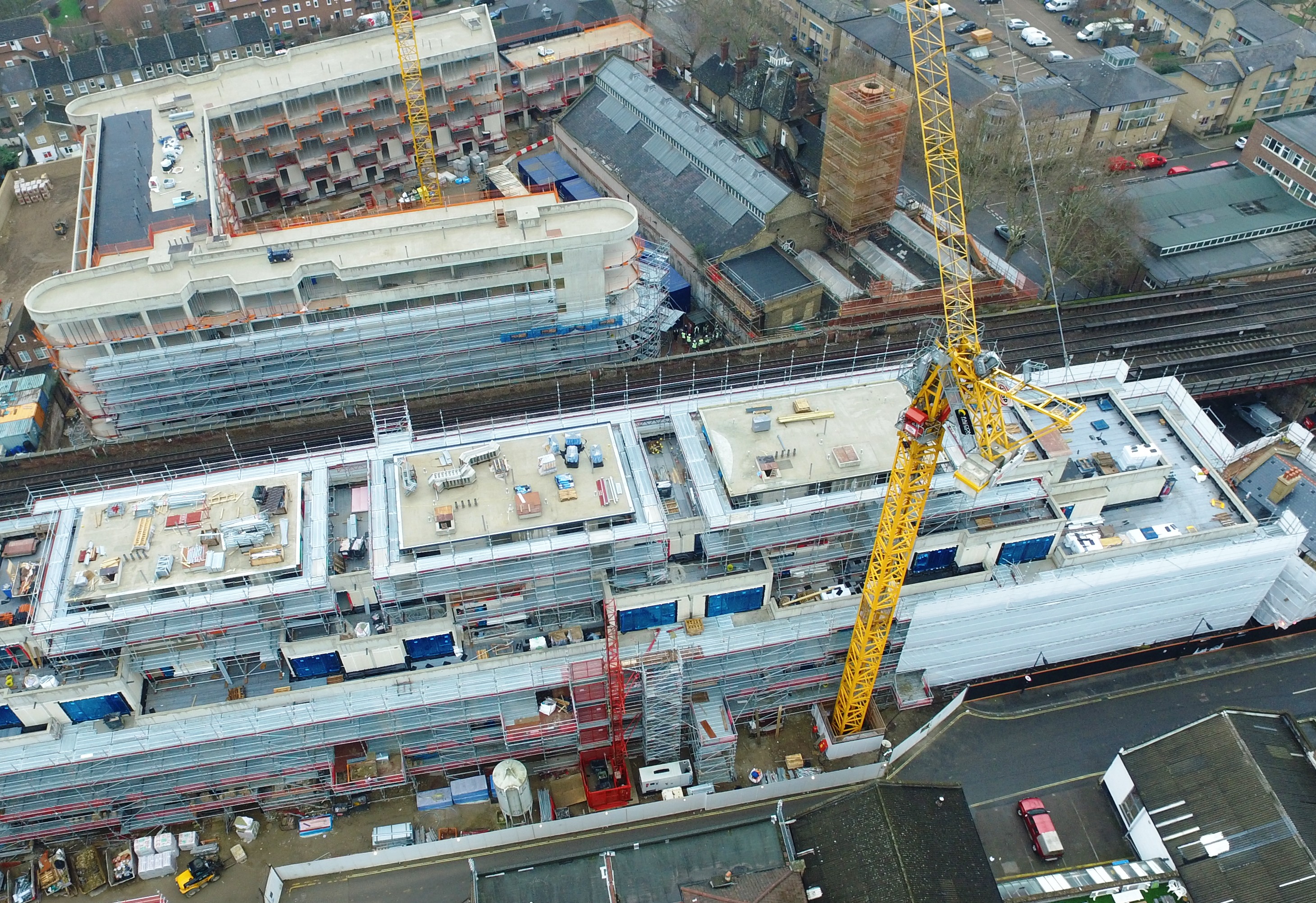 Safe, versatile and the optimum solution to scaffolding in a confined London location, adjacent to a mainline railway – the use of Layher scaffolding in a major residential development in the capital is generating clear-cut benefits.  Manor Place Depot in Southwark is seeing the construction of 262 residential units and commercial space by Durkan Construction for the Notting Hill/Genesis Housing Group, adjacent to a separate Grade II listed structure.The extensive scaffolding facility, valued at over £1 million, is being undertaken by Mercer Scaffolding & Plant Hire Ltd. who are relatively new investors in Layher equipment.

“We see the Layher system as very much the ‘scaffold for the future’ and the requirements that it has helped us to address in Southwark are evidence of this belief in practice,” says Adam Millgate, Operations Manager at Mercer.  “The design of the company’s Allround scaffolding and our close liaison with the Layher team, including a tailored open day held jointly to showcase its use to Durkan, have both been central to our scaffolding solution which is now scheduled to play a key role at the site for approximately 66 weeks.”

Adam Millgate draws immediate attention to the fact that the three blocks being constructed on the site sit either side of a four-track main railway line into London Bridge.  This is elevated on a 17-arch viaduct, the arches themselves being destined to provide excellent commercial opportunities as part of the complex.  Significantly, the area six metres either side of the tracks is designated as a ‘Zone of Influence’ where specific construction site conditions need to be observed.

“One of the main factors that this pointed towards was the avoidance of long scaffold tubes,” continues Adam Millgate.  “The Layher Allround design has allowed us to build the entire structure using individual pieces no more than three metres in length, while the in-built connection system not only simplified the erection process but also removed the risk of fittings accidentally falling from the structure or being left at the site.”  Protection fans were also installed as further safeguards next to the rail line.

The site design features a mix of residential units and is planned to welcome its first occupants in late 2019.  The high profile accommodation also includes a series of balconies of varying sizes and configurations, the construction of which also benefits from the use of Layher systems, notably the company’s console brackets.

“There are also three bullnoses at the end of specific parts of the structure which have had to be accommodated by the scaffold design,” comments Sean Pike, Layher’s UK Managing Director.  “Here too, our Allround system is ideal for the radii concerned while personnel staircases and loading platforms also feature at key points to simplify movement and site logistics.  These also include a series of cantilevered loading bays where ground conditions below have not permitted leg support to be used,” he adds.

Throughout the scaffold structure, bay widths of 2.57 metres are proving ideal for the positioning and movement of material such as window frames – a process that is enhanced by the absence of cross-bracing.  Up to eight lifts have been erected for the seven-storey building with the focus primarily on providing access for the external faces where up to one million bricks will be laid.

The advantages that arise from the use of the Layher scaffolding system were clearly evident during the open day demonstration that the company held with Durkan’s safety management team.  Apart from the need to maximise safety and efficient performance, there are specific features with this project that have had to be addressed – not least the location of the railway.  The potential gains that were identified prior are now being fully realised on site.

The Mercer scaffolding team also places particular emphasis on the lightweight design of Layher Allround and other components that have been installed. “The location means that crane access is significantly limited, with lifting only possible for the placement of components and stock,” says Lee Read, Mercer’s Site Supervisor. “The rosette connection system is also key as it not only provides a clear guide for safe erection but enables us to undertake the process far more quickly than by using, for example, a tube and fitting alternative.” Mercer estimates that the latter would have resulted in at least a 30% increase in the time required, markedly more manpower and materials, and may not have provided the ideal solution to the needs defined by the location of the railway.

Adjacent to the site of a listed Victorian bath house – that dates from 1895 and which features a refurbished chimney stack that will now act as a heating ventilation flue for the residential complex – the Manor Place development in Southwark is set to provide high quality features that combine up-to-date facilities with a proud heritage. With the construction also gaining from the modern methods that result from the combination of Layher scaffolding systems and the installation skills of Mercer Scaffolding & Plant Hire, it is a mix of history and advanced design that will be widely recognised for many years to come. 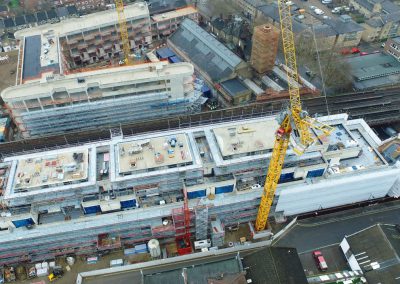 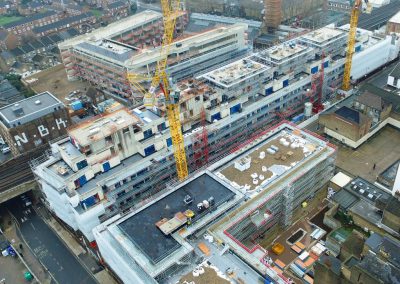 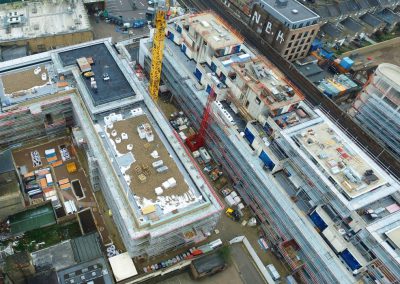 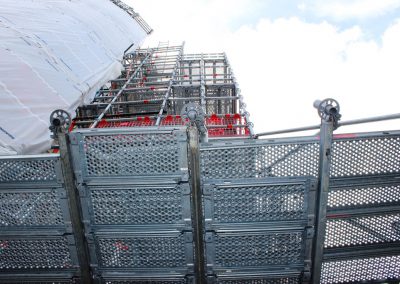 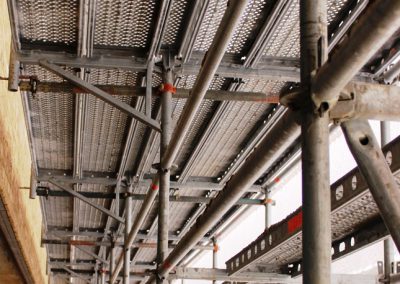 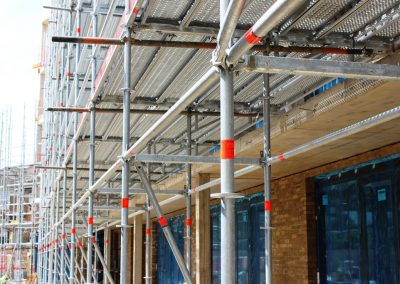 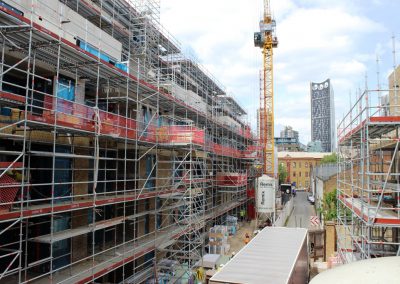